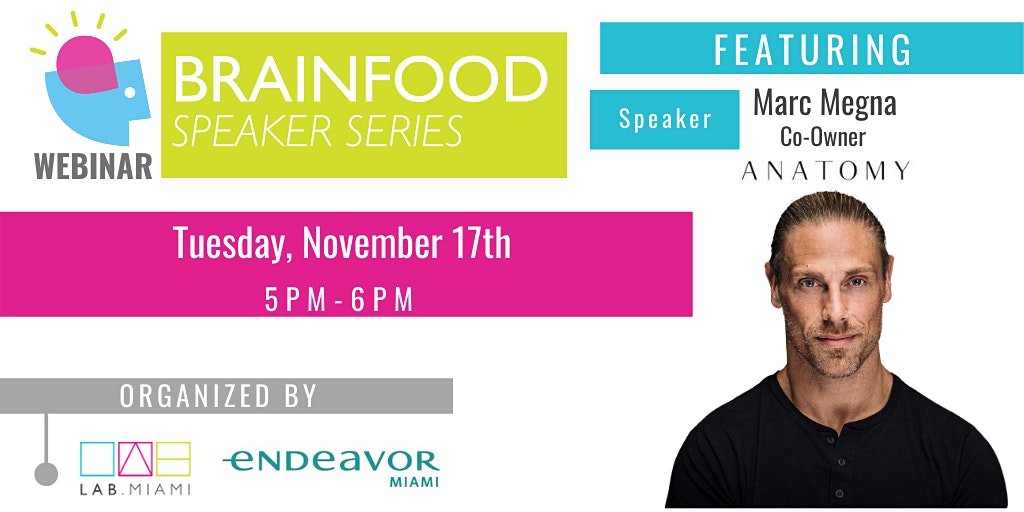 Brainfood is a monthly discussion with local entrepreneurs who share the secrets of their success, lessons from their failures, and experiences as founders. These monthly gatherings will help Miami startups and entrepreneurs understand the opportunities and challenges of launching and growing a business. Every participant will leave with a wealth of new ideas and key, practical advice to advancing one’s own entrepreneurial career. Brainfood is presented by The LAB Miami and Endeavor Miami and takes place virtually via Zoom.

You can listen to all of our Brainfood Speaker Series events on our podcast! The Big Idea Box

During his collegiate football career, Megna became a two-time All-American athlete and was drafted by the New York Jets in 1999. His gridiron career spanned several seasons in the NFL and CFL for the New York Jets, New England Patriots, Cincinnati Bengals and Montreal Alouettes. He was coached by NFL greats like Bill Parcels, Bill Belichick, Pete Carroll and Dick Lebeu.

In 2006, Marc decided it was time to complete his career as a professional athlete and decided to utilize the knowledge and skills he learned in the NFL to help people improve their quality of life through movement. The Massachusetts native settled in Miami where he worked tirelessly to make a name for himself as a fitness trainer, ensuring his efforts could benefit as many people as possible. Megna offered new clients complimentary sessions in order to prove himself, and took on 10-15 new clients per day, eventually causing him to break his foot from excessive standing. Nevertheless, it was this perseverance that led to a full-time position as a Tier 3+ Trainer at Equinox Miami Beach that he also supplemented with private sports training during the NFL off-season. Megna has trained people from all walks of life including notable clients like Alex Rodriguez, Gabrielle Anwar, Vernon Davis, Rob Gronkowski , Barry Sternlicht CEO of Starwood Capital Group, and Hollywood Film Director Adam Shankman. Megna also frequently contributes to fitness publications including Men’s Fitness and Bodybuilding.com, and became a recognized fitness model even gracing the cover of Muscle & Fitness Magazine in 2012.

In 2014, Marc became the co-owner of Anatomy Fitness, which is multiple state-of-the-art fitness facilities in Miami , Florida. He never forgot where he came from and how it all started. When Marc is not at Anatomy, he devotes an abundance of his time to motivational speaking, utilizing the knowledge from both his athletic and personal journey to inspire people of all ages. He’s featured in the JUST A KID FROM FALL RIVER documentary and authored his autobiography titled DREAM BIG NEVER QUIT.

Aryan is the founder and CEO of TREMBLE, a chain of boutique Pilates studios in South Florida and growing. Aryan focuses primarily on strategy & vision as well as oversight on operations of the Company. She and her team work with a wide variety of clientele from beginners to professional athletes. As a former lawyer who started the business out of a passion, Aryan has used her skill set to scale a company without taking outside capital and is focused on controlled growth. She is a featured speaker and moderator at the NFL Business Combine and numerous business podcasts and fitness outlets. She holds degrees from the University of California at Berkeley, Stanford, and the University of Miami School of Law and has set out to use her education and experience to empower the youth to enter into the entrepreneurship space and give back to the communities she works with.