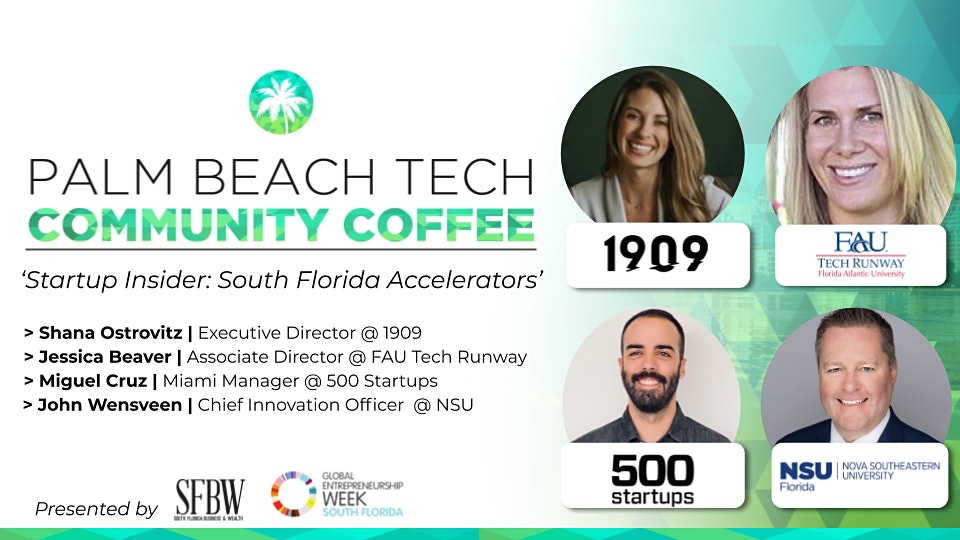 HOW PEOPLE AND BUSINESSES ARE RESPONDING TO OUR EVER-CHANGING WORLD.

Join us for our weekly tech community gathering (with coffee) for updates, best practices, and a way to connect with other local business leaders on what they are doing during this unprecedented time.

Startup accelerator programs serve as the complete ecosystem for founders looking to take their early stage business venture to the next level. By providing education, resources, office space, mentorships and in some cases funding accelerators have revolutionized Tech Hubs all over the country. Some very well-known companies, including “unicorns” AirBnB, Dropbox, and Stripe, among others have all belonged to Accelerator Programs.

Join us as we speak with four leaders who have played key roles in the outcome of our South Florida startups and how Accelerators have casted a postive effect on our growing Tech Hub.

What will be covered:

Shana Ostrovitz is the Executive Director at 1909. She started her career working for some of the largest consumer products brands in the world – including P&G and GE – before diving into the nonprofit world working with the American Diabetes Association in Southern California. Before joining 1909, Shana spent 4 years as Co-Founder of Rooster in Delray Beach. The company’s mission was to build resources and communities that support entrepreneurs. She has continued that forward as her mission in her life and work today. Currently, Shana is the Executive Director of 1909, a non-profit dedicated to Palm Beach County’s exponential growth in startup businesses, the creative industries and our own cultural significance.

Jessica Beaver is the Assistant Director at Florida Atlantic University’s Tech Runway, an incubator and accelerator for local startups. She grew up in Boca Raton watching her father , a lawyer, startup his company which was a distance-learning program for paralegals. As an adult, Jessica made her way to New York where she worked for the National Basketball Association and in sales for a few years at different NY companies. She later returned to South Florida in 2015 and noticed a huge change in the region with people staying here after college, innovation and change leading local efforts, and startups popping up. Jessica landed the job at Tech Runway over 5 years ago and is currently longest-tenured employee of the program. Since its inception in 2014, FAU Tech Runway has launched and served 93 startup companies, which collectively have raised more than $95.3 million in capital, created nearly 587 jobs and generated more than $109.9 million in sales revenue.

Miguel Cruz is currently the Miami Manager for 500Startups, where he is responsible operations and business development for 500 Startups Miami. Born in Cuba and an adopted Texan, Miguel graduated from the University of Texas at Austin and with a degree in Aerospace Engineering. He spent his collegiate summers with production operations teams from NASA and Lockheed Martin and returned to Lockheed Martin after graduation within the F-35 Global Sustainment team. After moving to Miami in 2011, he helped guide two Miami-based non-profit organizations at the forefront of US-Cuba relations through the development and implementation of new strategic plans. He later went on to consult for Miami-Dade County, and became the Director of Hiring and Partnerships at Wyncode Academy, a tech educator in South Florida, prior to joining 500 Startups.

1909 is a non-profit organization dedicated to the holistic growth of entrepreneurs in Palm Beach County offering members access to a one of a kind community, workspace, accelerator program and mentorship platform. We are a collective of creators based in Palm Beach County who believe that by working together our ideas, projects and innovations will better our community. We are unapologetically experimenting. We are a place for the process, the mess, the imperfection. We are a place for the unknown to become known. We believe that right now everyone can be the founder of something great – of a new business, art project, social initiative or way of life for yourself or your community. Our monthly membership gives you access to our workshops & events, resources, workspace and online community of talented entrepreneurs and freelancers waiting to connect with you!

FAU Tech Runway is a South Florida public-private partnership that serves as a hub to accelerate technology development and incubate startup companies. This incubation and acceleration happens in a 28,000-square-foot collaborative working space that provides entrepreneurs with a complete ecosystem to house, educate, mentor and fund their companies from origination through venture funding. Since its inception in 2014, FAU Tech Runway has launched and served 93 startup companies, which collectively have raised more than $95.3 million in capital, created nearly 587 jobs and generated more than $109.9 million in sales revenue.

500 Startups is a venture capital firm on a mission to discover and back the world’s most talented entrepreneurs, help them create successful companies at scale, and build thriving global ecosystems. It is one of the most active venture capital firms in the world. Since its inception in Silicon Valley, 500 Startups has invested in over 2,300 companies via its 5 global funds and 15 thematic funds dedicated to either specific geographic markets or verticals. Its 100+ team members are located in 20 countries around the world in order to support the 500 Startups global portfolio of investments which spans more than 75 countries. Beyond providing seed capital, 500 supports startups via their Seed Accelerator Programs which emphasize digital marketing, customer acquisition, lean startup practices, and fundraising for pre-Seed companies. 500 Startups further contributes to the development of innovation ecosystems by supporting startups and investors through educational programs, events, conferences, and partnerships with corporations and governments around the world.

The Alan B. Levan NSU Broward Center of Innovation is a public-private partnership between NSU and Broward County. The Center is focused on three themes (innovation, technology, entrepreneurship) and four pillars (ideate, incubate, accelerate, post-accelerate). The Center is being designed to serve the community resulting in breakthrough ideas, new technology, job creation, talent skills pipeline, company formation, and scaling of early-stage and young startup companies. Each of the four pillars are supported by customized programs, events, and wraparound services. In short, the Center is an economic development engine for Broward County and South Florida with potential for national and international impact.

We would like to hear from you and how our members are responding and staying ahead of their business challenges during this time. We will be offering weekly updates with speakers who can help answer your most pressing questions.

We look forward to your participation!